The Art of Losing

In the winter of 2021 we had a period of snow for a few days which laid 6 inches of snow on the ground. I was walking in Kenwood Park in one of my favourite places and I noticed that the left lens of my specs was missing. The pair of specs were quite expensive varifocal glasses that were necessary for reading as well as for distance seeing.

There was one path into the area I was in so I searched along that space but there was about 6 inches of snow  and it was impossible to find it. Maybe I hadn’t lost it there, doubts crept in and I decided to leave it til another another day, perhaps when the snow had melted.

About a week later and the snow was mostly gone I went back to that place and I had barely taken one careful step along the path and there it was embedded in the grass. Wow I was so pleased and amazed at finding it so easily.

Now, just over a year later I was reclining on a bench in Kenwood Park enjoying a rare afternoon of sunshine. I propped my rucksack up at one end of the bench and used it as a pillow, relaxed back and started reading my book, “When the Body Says No” by Gabor Mate. Half an hour in and I began dozing in the sun, laid my book down on my chest and put my glasses on the book cover.

Sometime later I woke up, checked the time and raised myself from the wooden bench, swung my feet to the ground, stood up and when I looked down, there were my glasses on the grass. Thank goodness I hadn’t trod on them. I packed up everything, put my glasses in my pocket and headed towards Kenwood House to get a cup of tea in the cafe. Being a Sunday afternoon and the hottest day of the year so far, the fields in front of the house were crowded with families, parents, friends, children and dogs all taking advantage of the beautiful afternoon and I immediately realised there would be a long queue at the cafe. No tea for me.

Nevertheless I headed that way via the flower garden which is absolutely stunning. Everything is early this year and it is a blaze of colour. 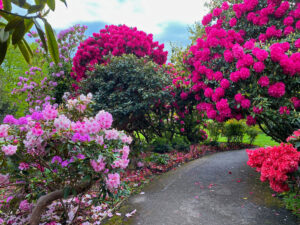 Couldn’t resist getting the camera out and reaching into my pocket for my glasses and guess what, that lens was missing again. I needed the glasses to take the photos. I was so disappointed and worried about finding them but I decided to brave the queue and go for a cuppa first. Manage my state and be logical in my thinking as to where the lens was most likely to be.

The obvious place was by the bench I had been sleeping on but what if it had detached on the way over to the house? So I finished my tea and started retracing my steps. It was quite a way but I stayed positive, believing the lens would be there, somewhere. You’ve probably seen those dogs, spaniels, running around with their noses on the ground and suddenly changing course as they get a scent of something. Well I felt a bit like one of them. Every shiny thing in the grass, such as bits of plastic or a bottle top caused me to divert and inspect. It’s a funny thing covering the ground knowing it’s unlikely I’ll find it in such a large landscape, 72 acres of Kenwood, but there is always the thought that if I don’t continue to look I might miss it, so I had to be thorough.

Well eventually I got to the bench, looked down where I had dropped the glasses and suddenly I saw a part of the lens, the rest being hidden by the grass. Amazing! There was that feeling again. Success, bliss almost. I felt like celebrating with a bottle of Champagne but my illness forbade that. 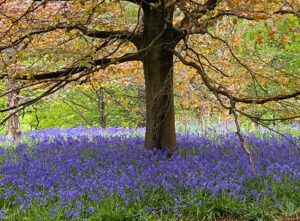 I headed towards home passing an area with swathes of Bluebells. I’m not sure if that is the correct word to describe the Bluebells but it works for me. Have you noticed the aroma of Bluebells. It is intoxicating.

Reminds me of a relationship long ago. Her favourite flowers were Freesias and they had an intoxicating smell and of course any time I smell Freesias now it is a powerful anchor and brings back lots of good memories.

So what’s the point of all this? There is a way and like most things we do it requires that we are in a good mental or emotional state.